It’s coming soon and I make a return this year. After having cleared the qualification round a couple of times but never making it to Round 2, I hope to break my personal best this year! Lets see :)

Watch this space for updates as the event progresses! Excited!

Done and dusted. Qualified with 55 points, successfully solving 3 out of 4 problems.

My solutions are in my Github repo

In short, disappointment again! :( Wasn’t able to compete in Round 1a and 1b as I was travelling. This meant, I only had one chance to compete and I failed.

Key would be to not lose focus as the year progresses and compete in 2015 with plenty of practise. Until now, I have been competing with barely a couple of days of practise. This doesn’t work! Algorithmic programming is not the same as what I do at work on a daily basis. TopCoder SRMs will help. Aim to compete in 1 SRM per month.

The following on the wall in my room should act as a daily reminder. Very disappointed, but I only have myself to blame. No excuses. 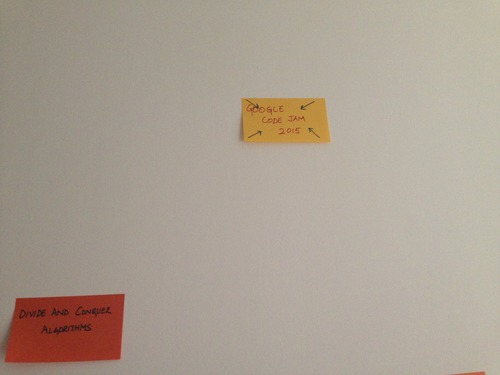